Devotional peoples or seekers who follows the path of devotion (Bhaktiyoga) for God- realisation begin their journey by worshipping a Deity (Devta). A temple at home is the basic requirement for ritualistic worship (puja). Nowadays, the Mandir or Poojaghar (Home Temple) is designed as per customer requirement or as a sample show piece without giving much thoughtful efforts to the scientific or practical aspect in manufacturing process. As per spirituality, there are certain scientific reasons underlying every act being performed during worship in a specific way. In this provides details such as the direction in which the Poojaghar (Temple at home) should be placed, its colour, shape, designs as per meditations, considering Vastu tips, aesthetics and arrangement of Deity in it according to Spirituality. 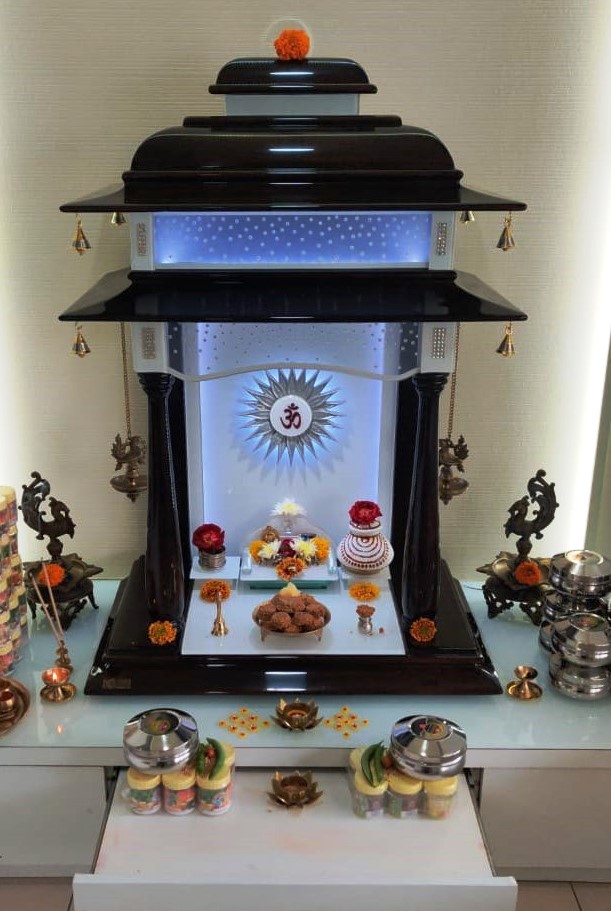 Features of the Poojaghar (Home Temple)

The temple at home should be made of teakwood & other expensive wood like Sandalwood. Sandalwood is expensive and may not be feasible for the average or middle class individuals. Comparatively, teakwood is cheaper and has better ability to retain and emit sattvik (they emerged from the woods onto a vast open plain) waves. It also successfully resists pests and insects, humidity, wind damage and sun damage. Eventually it is the bhav (Dedication) towards God that attracts the Divine waves to the top of the temple, which are further dispersed in the house uniformly as per the requirement.

The colour of the Poojaghar…

According to the modern trend & interior of your home/office home temple at painted or finished with different colours in the name of decoration, it is ideal to retain the original colour of wood, that is, pale brown. God operates through two Principles, namely saguṇ and nirgun principle. Pale brown colour symbolises the border between the Good (saguṇ) and the Poor/Bad (nirgun), meaning the transition phase of the journey from saguṇ to the nirgun. Human beings with Five Cosmic Principles (Panchatattvās) as their constituents fall in the saguṇ category and the formless God falls in the nirguṇ category. Since a simple religious act like worship of a Deity amounts to spiritual practice, it helps the individual in transit from the state of saguṇ to nirgun, meaning, from duality to non-duality. Obviously, the pale brown colour of the Poojaghar is complementary to this spiritual journey. 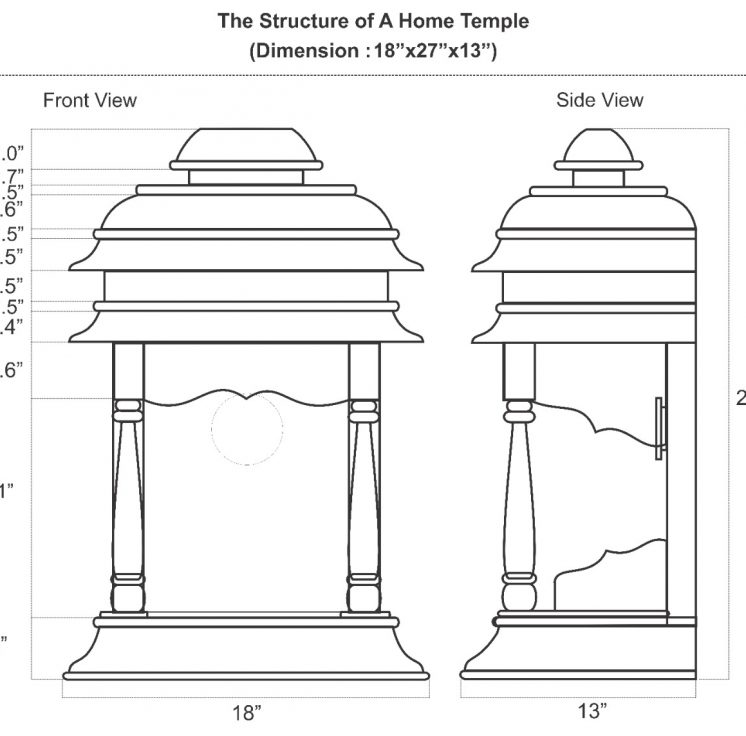 A three dimensional structure is determined by its Length x Width x Height (LxWxH). When deciding the structure of the home temple from spiritual perspective, the dimensions can be determined from the information given ahead. These examples have been provided so as to understand the proportion. As per his convenience, a worshipper can make the temple at home according to the home or office interior in
a bigger or smaller size in proportion.

Structure 1: ‘The proportion of Length x Width x Height should be 13”x18”x33”. Proportionately other measurements are given. Terminology of structure measurement 13”: 13 inches, 18”: 18 inches, 33”: 33 inches; the distance between two poles of the temple at home is considered from their periphery.

Structure 1 and 2 are useful for a worshipper. The home temple made as per structure 2 is better from the perspective of its stability on the ground and attractiveness.

The home temple is made with the intention that the worshipper gets maximum happiness (Chaitanya/Anand) from the worship of the Deities (Devta) for the goodness of life. The two sides of the home temple are left open so that the Divine consciousness emitted by the Poojaghar is not blocked and the worshipper benefits directly. This is applicable to the temple at home that is located in a common room/Pooja room where all the family members have free access. When the temple is in a bedroom of a couple, its sides should be closed for the following reasons. During the menstrual cycle, women are not permitted to enter a temple or pray/worship; because the righteousness (sattvikta) in the temple is likely to cause distress to them. Similarly, during their menstrual cycle they are also likely to suffer from distress due the Chaitanya emitted by the temple at home. When two sides of the temple at home are closed, the quantum of positive energy (Chaitanya) emitted is relatively less; hence, it suits the bedroom of a couple.

A home temple should always be in the east-west direction. When the temple faces the east, the waves emitted by the Deity get activated on the strength of Energy of action (kriyashakti) accumulated in the hollow in the east. This helps the Non-materialized (Nirgun) waves of the Deity transform into Materialized (Sagun) waves. 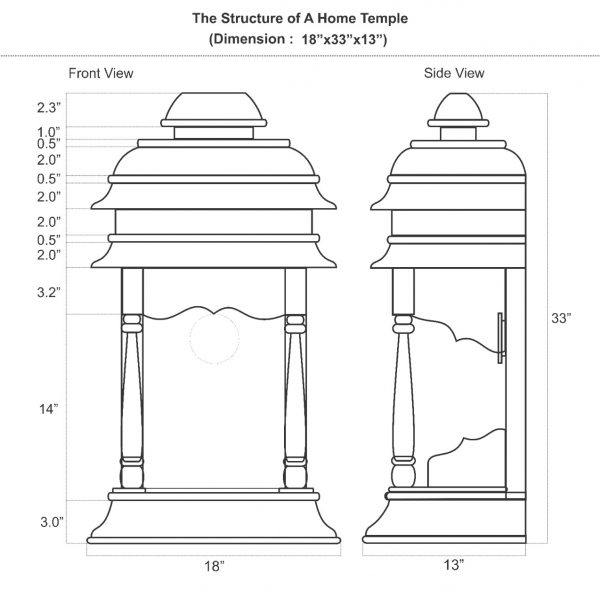 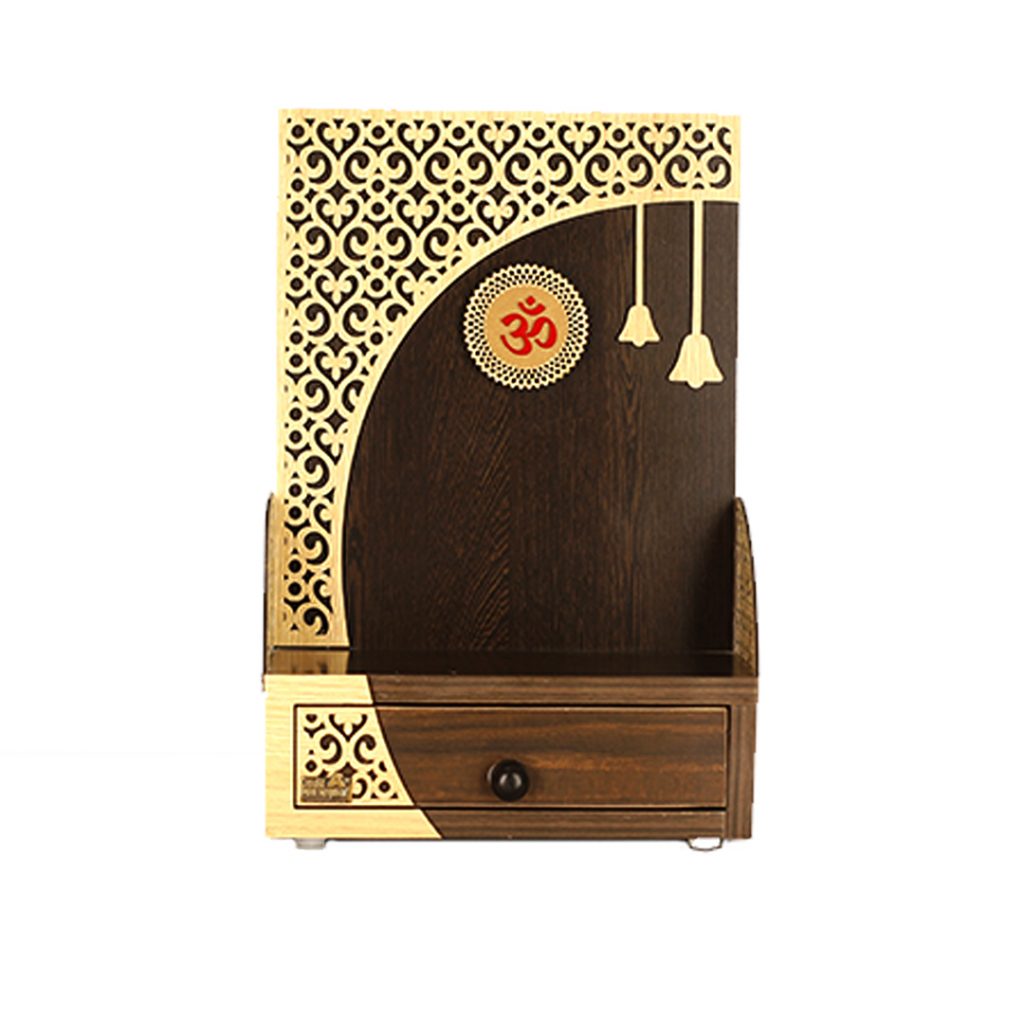 ₹4,999.00
When the active energy (Kriya-Shakti) from the universe associated with the east-west direction manifests due to the waves emitted by the Deity, its direction is mostly upwards. The effect of the upward energetic movable waves on the environment lasts much longer than that of the downward energetic movable waves. Hence, for the effect of the sattvik (Emerged positive energy) waves emitted by the Deity to last longer, the direction of the temple at home should be east-west. On the other hand, when will power (Energy of will/Iccha -Shakti) accumulated in the north-south direction gets activated, it flows downwards. This flow activates the Oblique/slant path (tiryak) waves (waves causing distress) in the environment. This causes obstruction to the sattvikta emitting from the Deity and as a result the benefit obtained by the individual when compared with the first arrangement is less due to proportion & direction of Poojaghar.
Newer Method to arrange the substances in Puja Thali
Back to list

Shopping cart
close
Sidebar
Start typing to see products you are looking for.
Translate »
× How can I help you?